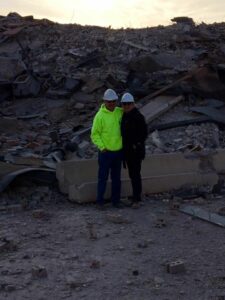 When Mr. William A. Geppert Sr. originally began this business for his 4 sons in 1925, (William Jr., Joe, Jim, and Richard) it was with the hope and vision to provide for a better future for his children and the future generations that were yet to come. He blessed them with their original building block to grow in life and showed them that the world was their oyster to grow, or in their case demolish.  As a company, we believe that we continue to honor the legacy that Mr. Geppert started for all of us by never remaining stagnant in our growth. After all, we were to “tear down to make way for progress”.

In 2015 Richard & Mary Pat Geppert made the decision to seek National WBE Certification, via the WBNEC, due to observations of shifting industry trends with a continued push for growth in market diversification. They saw the potential for further growth as a 90+ year old company and actively pursued it. The certification process was rigorous and dove deep into the performance record, integrity, and stability of the company. The Geppert’s believed that the benefits of being certified as a Woman Owned Business was well worth it and that it would strengthen Geppert Bros., Inc.’s ability to participate in Supplier Diversity Programs.

The Geppert’s recognized that diverse contractor’s help Corporations /Owner’s/General Contractor’s meet the needs of their diverse customer base and maintain their competitive edge by providing quality services that meet specific requirements.  As a WBE, businesses are afforded improved access to government and private sector work and set-asides as well.  While WBE status does not guarantee more work by virtue of the status itself, WBE status places businesses in favorable positions as they bid for contracts or business relationships with those seeking to work with WBEs.  For a business looking to grow, becoming a WBE could be the key to greater revenues and connecting with new industry contacts.

WBE’s are needed to win contract awards. Many companies use WBE’s as their contractors to gain major corporate and government contracts. Each year state, local and federal agencies award billions of dollars in contracts to private businesses and of those contracts awarded, government agencies set aside a percentage of business opportunities or contacts for certified Women Business Enterprises (WBE)

WBE partnerships support continuous improvement of products and processes and further its’ corporate value-driven culture. Beyond compliance, supplier diversity promotes innovation and creativity and allows corporations to meet the needs of customers and consumers.